The Washington Post published the Five Myths about Female Veterans today, and unfortunately, all of the are true.

When I came home from Desert Storm, I was hungry for something that explained how I was feeling.  China Beach had just been cancelled and gone into reruns.  I devoured it.

I also read and reread A Piece of My Heart, which is a book of stories of women veterans from the Vietnam War.  It was just about the time when the Vietnam vets started telling their stories, so there were a lot of books coming out.  I read all of them, because, other than Pieces of My Heart, there wasn’t anything representing the voice of the women.

I even went to the Veterans of Foreign Wars down in Tacoma, Washington.  I walked in and there was a bar with a bunch of old men sitting at it.  I might as well have been asking directions.

That’s still a mixed bag for the women.  Some have great success at their local organizations.  Others come in and are told to apply for the Women’s Auxiliary.

I’m also on a Facebook page for Desert Storm Combat Women.  Many of them report going to the Veteran’s Administration, and their civilian male spouse is addressed as if he is the veteran.  Or they have to prove they are a veteran while the male veteran standing next to them does not.

We have a local grocery store in Washington, DC that gives veteran parking. For the overseas people, it’s not a disabled slot or has any legal requirements; it’s merely something that a store does as courtesy, like the slots for pregnant women.  Two women have come out to find nasty grams on their windshields.  I park there myself, so I’m expecting one day for someone to do the same to me.

There’ll be an article in the Washington Post on something like PTSD, disabilities, or problems with the VA, and the reporter gravitates to all the men, unless it’s about a woman’s issue.

As a writer, I’ve submitted to a lot of veteran anthology calls. I was often the only woman veteran.  Usually they got a wife or daughter talking about a family member, but even there wasn’t many women’s voices represented.

Obviously, the women need to speak up more, but at the same time, it gets old hearing the same stories again and again.

Just remember that there were 40,000 women in Desert Storm.

Desert Storm war veteran Linda Maye Adams shows the diversity of what war is like for the women who deploy in this collection of short stories and poetry.  The stories run from “First Night,” and “Between Black and White,” because war seldom ends when the war does.  The poems include

This would be the largest deployment of women at the time.  Over 40,000 women went to war.  It was so new that people questioned whether women should be there, and what would happen to the families they left behind.

Linda Maye Adams was one of those soldiers.  Soldier, Storyteller is a rare inside look at war from a woman’s perspective.

Her memoir answers the question: “What was it like?” 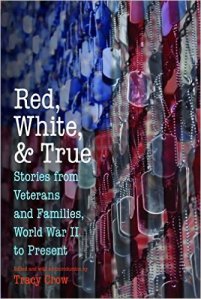 Even as we celebrate the return of our military from wars in the Middle East, we are becoming increasingly aware of the struggles that await veterans on the home front. Red, White, and True offers readers a collection of voices that reflect the experiences of those touched by war-from the children of veterans who encounter them in their fathers’ recollections of past wars to the young men and women who fought in the deserts of Iraq and Afghanistan.

The diversity of perspectives collected in this volume validates the experiences of our veterans and their families, describing their shared struggles and triumphs while honoring the fact that each person’s military experience is different.

Leila Levinson’s powerful essay recounts her father’s experience freeing a POW camp during World War II. Pulitzer Prize-winning author Tracy Kidder provides a chilling account of being a new second lieutenant in Vietnam. Army combat veteran Brooke King recounts the anguish of raising her young children by day while trying to distinguish between her horrific memories of IED explosions in Baghdad and terrifying dreams by night.

These individual stories of pain and struggle, along with twenty-nine others, illustrate the inescapable damage that war rends in the fabric of society and celebrate our dauntless attempts to repair these holes with compassion and courage.